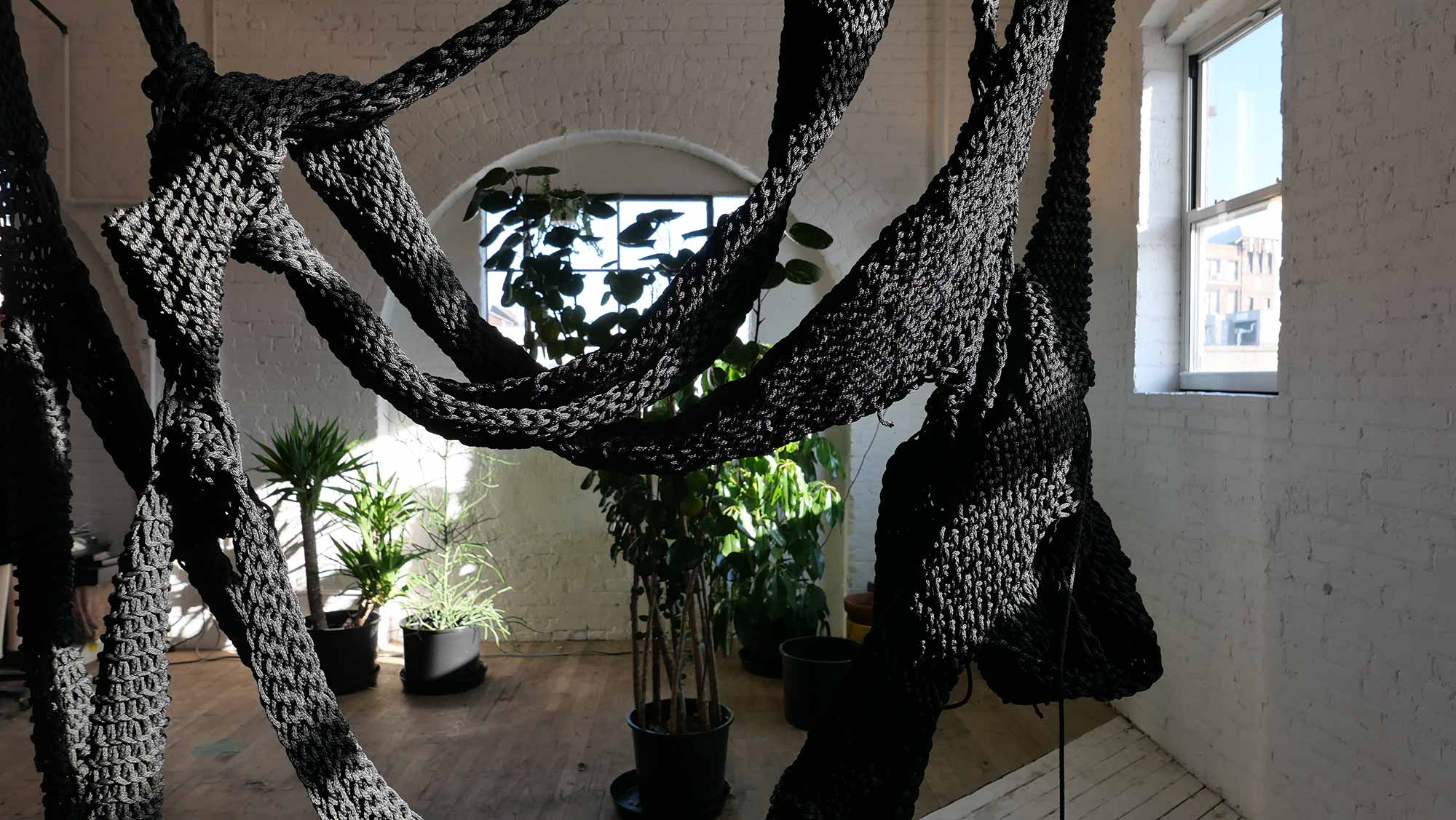 The inception for this piece began when I came into my first quarantine in March 2020. I packed 6,000 feet of black parachute cord made of nylon to take with me. I tried to treat the whole experience of quarantine as if it were a project and task myself with crocheting a calendar for the time, trusting a natural end point through discomfort and uncertainty.

I find comfort in the simplicity of parameters. The quarantine of a self-contained time and space was nothing if not a new set of parameters to abide. I had a limited amount of a single material that was divided into 500-foot bundles. I felt keenly aware of the arbitrary nature of days, weeks, and months when one simply flowed into the next, inviting the existential questioning of what is the significance of “6 p.m.” or “Monday” when all delineations had broken down and come to a halt?

I finger crocheted this piece, choosing this repetitive gesture that bypassed an external tool so I could make direct contact to the material with my body in one continuous line. No hardware, no glue, nothing but my own hand, unmediated. I realize now there was a desire for something direct when so many of our forms of communication during this time were mediated. Haptic connection became more vital than ever.

Through the gesture of the finger crochet, I loved watching the single line become a plane and then a three-dimensional form over time, accruing and becoming denser, heavier, amassing over time as quarantine dragged on and on. Picking it up and setting it down inevitably became a ritual process, not unlike the dot-making of the batik in Indonesia.

One slipknot wove into the next, one day flowed into the next, and it became a lens through which to understand both time and process.  Simultaneously to working on this piece, I returned to a text so important to me: Syncope: The Philosophy of Rapture by Catherine Clément. It was a kind of directed study, where I would read and record the text. I was thinking a lot about how oral tradition has such potency because of the vocal resonance, the sound waves that are transmitting the information. The sound of my voice reading the words aloud became another way of accessing the wisdom of the Syncope text. I was listening to Russell Brand interview writer Elif Shafak on his podcast Under the Skin. She shares with him her ideas of “secular acts of faith” as experiences where we act on trust that’s rooted in something deeper than the explicable, but is without a theistic framework. Falling in love is a secular act of faith, claims Shafak. For me, reading Catherine Clément into a microphone and hearing myself say those words aloud was a secular act of faith.

Syncope is all about the offbeat, the interruption, or the suspension of time. Clément dives into Western philosophers (Plato, Descartes, Hegel, Kierkegaard, Bataille) and Eastern asceticism (the Tantra and Bharatanatyam dance)—just to name a few influences—to look at both mysticism and sexuality as spaces where syncope emerges. The term “syncope” mostly belongs to the realm of music as the rhythm between the rhythm, the offbeat, as a kind of harmonious interstice. For me, it became a particularly important form of contrast and boundary. How can we know what is on if we do not understand what is off? To experience the edge of the threshold is to return back to the parameters I was craving.

After reading Clément’s text each day, I would spend time playing my harmonium, an Indian pump organ that creates a series of drones we understand as binaural (notes played are of different frequency tones but the brain perceives them as one). The harmonium is traditionally used for bhajan or Indian devotional chanting and was originally a Western European instrument later adopted by Indian musicians during the nineteenth century. The harmonium is already a synthesis of Western and Eastern traditions, straddling two worlds, two cultures, two places.

I’m compelled by the way that music complicates the narrative of a singular act of exploitation at the hand of the colonizer. Musical movements occur in such a rich shared network of experience, culminating in syncretic strains of influences. I have been playing the harmonium for a couple of years now after some mostly unsuccessful childhood training in classical piano. It brings me a tremendous amount of joy and invites me into a deeply meditative state. It is a different thing for my fingers to do after hour upon hour of finger crocheting.

I began laying harmonium drone over my audio recording of Clément’s text thinking about that moment of suspension and interruption. Clément used the word jouissance, the French word for female orgasm as a kind of syncope. Just like the drone gives all the tones equal weight, eventually merging into a single note, Clément asserts the idea that all rapture, all ecstasy, sexual and spiritual is a form of syncope, of egoic death.

Just like with any meditative practice, the moments of boredom eventually settle in. With an absence of climax, of goal, of a finale, everything with this project began to melt into a hazy dissolution of the center. This mirrored so much of what I was experiencing in my understanding of pandemic. When would it end? What was the “it”? Nobody actually knew, and I had to divorce myself from the theories, the speculation, the myth-building rooted in fear and anxiety. I took myself off social media. I limited my communication. I framed the isolation as a deep and necessary introspection, which didn’t make it less difficult, less painful. The egoic death here was to dismantle the idea that there would be an end, and even if the end came, that it would be distinctly pinpointed to a single moment, a catharsis of any recognizable variety.

In this way, I found my experience of orgasm to be a similar experiencing of mounting pleasure. The traveling around and around on a lemniscate shape. It was always and never there. I kept looping one slipknot after the next, sometimes slowly, sometimes quickly, making my way through 6,000 feet of black paracord, one day at a time.

Then came this unexpected moment when the thing I was holding in my hands suddenly became bigger than my own body. Like a true hiccup, a surprise moment, I was thrown into the realization that the thing I was holding with my hands was now large enough to hold my body. This perceptual shift, a crossing over from one scale to another, is a magical moment in the artistic process. It is stepping from the dimension of discrete object to architectural space.

So, this became the final point of departure for this piece. It also continued to be an ontological study, in that not only was I examining my way of being in the world, but I have since  become increasingly more curious about an object’s way of being in the world and the role of hyper objects. This is a whole other thing; I’ll save it for another piece of writing. The more I was led to inquire what this object wanted to be in time, in space, the more was revealed to me.

In Patanjali’s system of yoga, the third of the eight limbs (components) is called asana – the body’s posture, expression of various corresponding shapes as a form of self-discipline, austerity, and devotion. I have always experienced such ecstasy practicing these postures, especially when being adjusted even more into the shape. It is the same kind of surrender I have found in being in restricted in bondage and suspension. In so much of what I do, I am seeking the opportunity to surrender. When I was finally able to surrender, I allowed for it to suspend my body in space, inverting my perspective. For me, that is the truest form of ecstasy, a veritable syncope.